I want to use this opportunity to share some activity that took place on Facebook this week. Because you deserve to know the truth about who is running for the 115th district State Representative seat, I'm continuing to explain the illegal coordination going on between my opponent Paul Jacobs and his big money Chicago based Super PAC, Liberty Principles PAC.

I have included a few links and pictures that I hope you will take the time to review and read. But first, here is some relevant background information.

Paul Jacobs has been illegally coordinating his campaign with Liberty Principles PAC. He has taken hundreds of thousands of their dollars to run negative ads to attack me. Liberty Principles PAC CEO is Dan Proft. Dan Proft is the proprietor of several Fake News newspapers that he has started all across Illinois. Basically, Proft bought a bunch of cutesy domain names like the CarbondaleReporter.com, and the Southwest Illiinois News (SWIllinoisnews.com) and used the websites as places to plant fake news stories in support of political candidates that Proft's Liberty Principles PAC is funding.

Then, Proft writes headlines and plants them in his fake newspapers and then uses pictures of the fake news in campaign propaganda that he creates in coordination with several different Primary campaigns for State Representative. It's totally illegal! Independent Expenditure Super PACs are not allowed to directly coordinate with candidates' campaigns. But the law has not stopped Paul Jacobs and Dan Proft from illegally working together to spend hundreds of thousands in campaign cash on negative ads that distort my record and attack me for supporting the opening and funding of our schools. If you look below you'll see how each campaign is closely coordinated with the other and with Liberty Principles PAC. 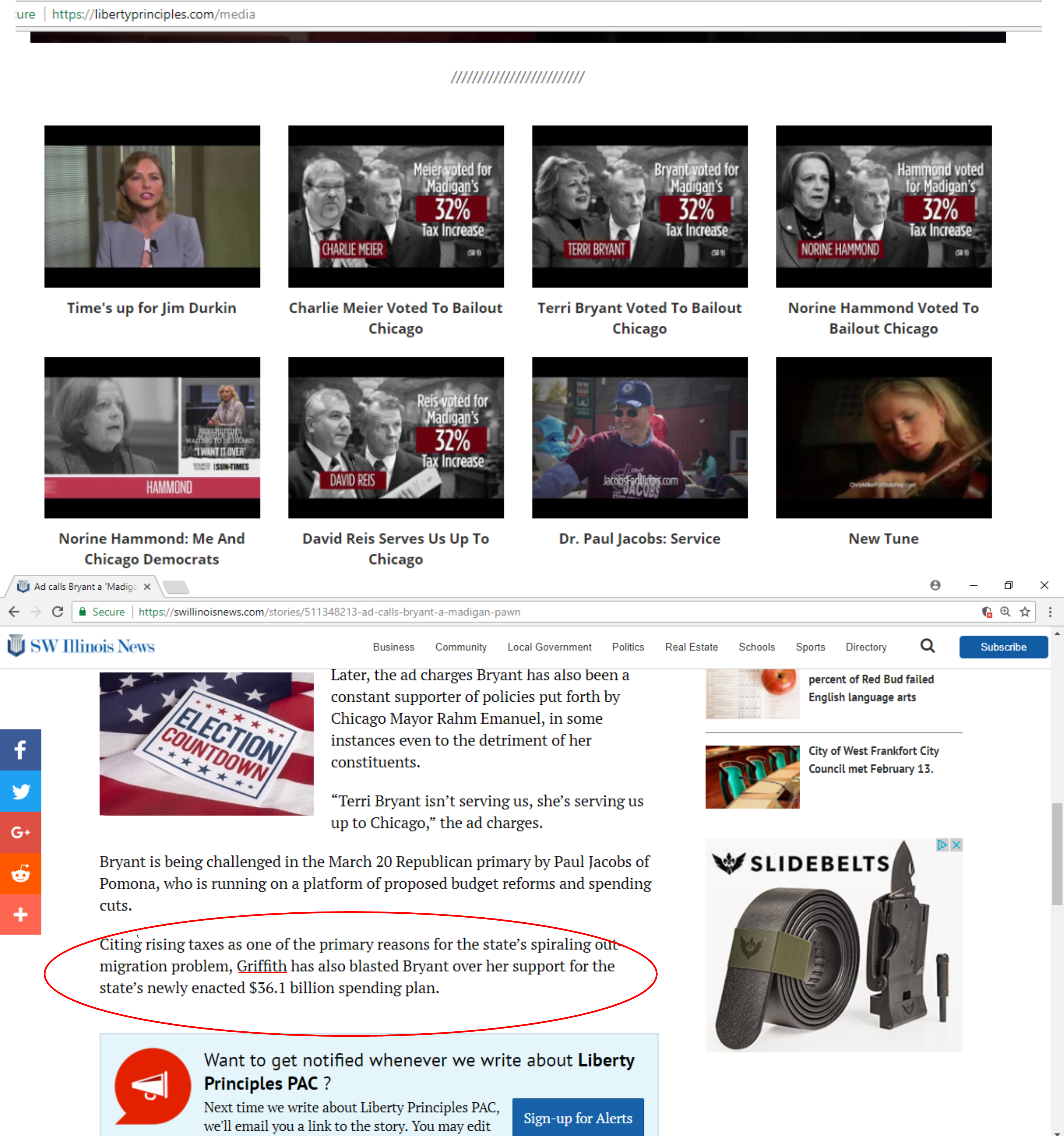 Follow the link for a fun and thorough explanation by a real journalist, Rich Miller of Capitol Fax. I think you'll be highly enlightened. But please, come back and KEEP reading for more hijinx from the illegally fake newspapers and Paul Jacobs' campaign.

But the illegal coordination gets worse, folks. Paul Jacobs and Liberty Principles PAC are now attacking me for supporting SB 1947, a recently signed law that secures record funding for our schools. Two big problems. 1. Paul Jacobs has supported SB 1947 from the beginning and it even says so on his own website right up until this minute.

In case Dan Proft and Paul Jacobs realize their mistake, I have helpfully provided a picture of his website below: 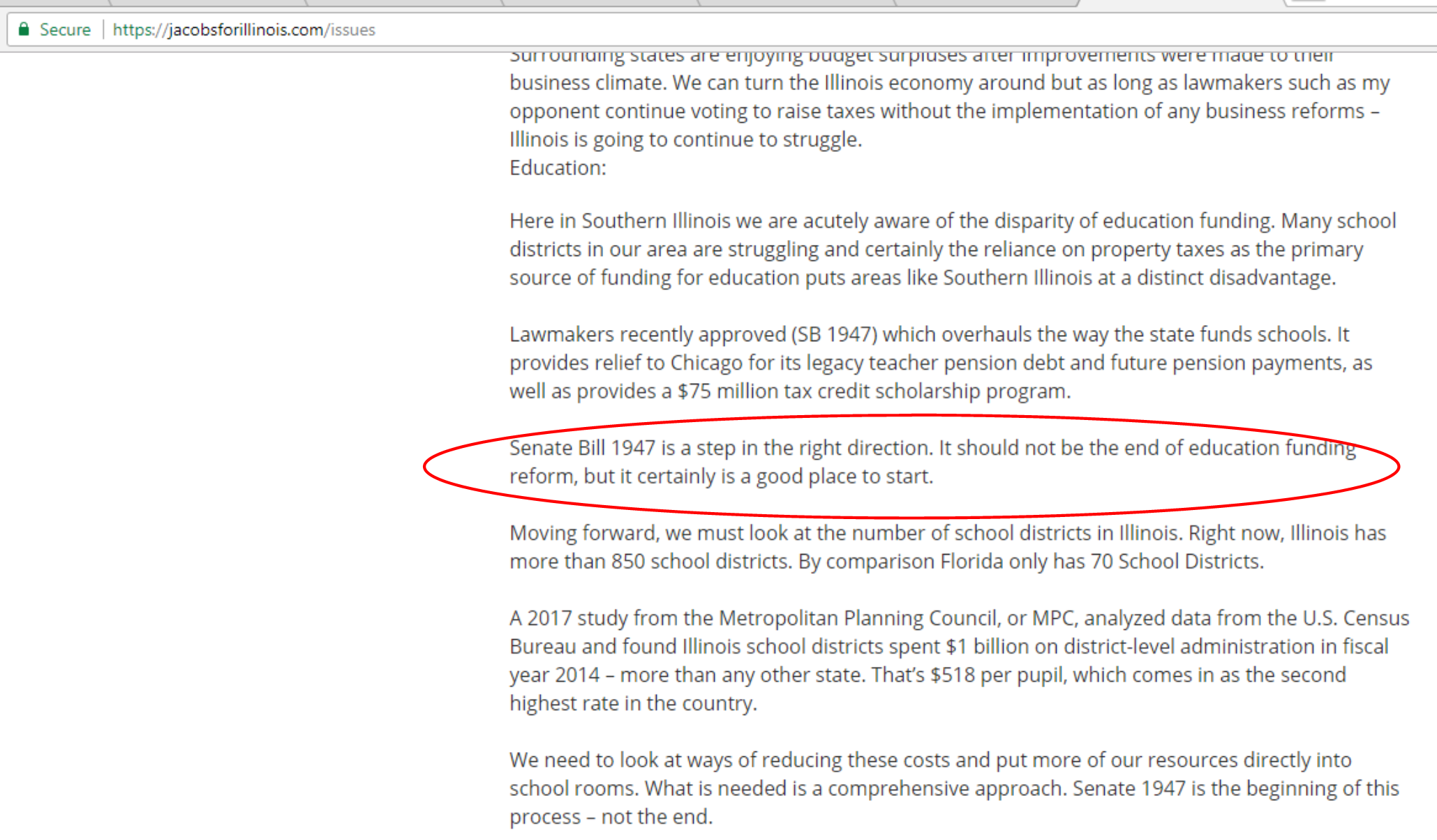 2. SB 1947 will bring more than $5 million in NEW funding to local schools and ensures fair and equal funding for Southern Illinois schools. Every school in my district does better financially under SB 1947.

Senate Bill 1947 (Public Act 100-465) creates a new Evidence-Based Funding Model for Illinois public schools. The new law was the result of years of negotiations and was supported by a broad coalition of education advocacy groups. The new funding model places Illinois school districts into tiers based on local resources and total need. Tier 1 districts receive 50 percent of all new funding the State allocates to K-12 education in FY 2018.

I'm supported by both school management groups and organized labor in this race because I voted YES on SB 1947.

So, this is part three in what was supposed to be a 2-part series showing illegal coordination between Paul Jacobs and Liberty Principles PAC. As I showed you above, Paul Jacobs is now running attack ads on a vote that I took to secure record funding for our schools. Remember, the same Chicago radio personality that runs the fake newspapers SWIllinois.com and the Carbondale Reporter also runs Liberty Principles PAC. They are doing illegally coordinated hits on several different House Republicans using fake newspapers, a Super PAC, and each individual campaign. The bouncing ball can be hard to follow but try to stay with me.

When the SW Illinois news reported that Jacobs was attacking me with a new ad on SB 1947 we discovered two things. 1. Paul Jacobs' own website says he is FOR SB 1947 even as of this morning, and 2. The SW Illiinois news mixed up the Paul Jacobs and Josh Griffith campaigns when writing their smear article on me. I suppose that 'clerical error' could be forgiven, seeing as how the guy running the fake newspapers and the illegal PAC coordination is working with lots of campaigns around the state.

When we called out the 'clerical error', the SW Illinois News fake newspaper quickly worked to fix their mistake. Now comes the funny part. Check out the 'correction'. Here's the link: This is from today - still up to this minute 3:21 PM on Saturday Feb. 24:

And here's a screen shot. Folks, you just can't make this stuff up! Joshua Griffith is Rep. Norrine Hammond's opponent up in northwestern Illinois! The illegal coordination has gotten so massive that Dan Proft can't even control it all.

Here's the bottom line: Do not be fooled by these fake newspapers or the illegal coordination going on between my opponent and his Chicago based Super PAC backers. On March 20th, I would humbly ask that you would consider supporting me to continue to bring integrity and leadership to Springfield. I pledge that I will always put Southern Illinois first!

Coming up tomorrow, Sunday February 25th, I'll host my 3rd Annual Cheap Chicken Dinner at the DuQuoin American Legion from 11:30 a.m. to 2:00 p.m. Tickets are only $10 per person and kids under 12 eat FREE! This is a great way to get a cheap family dinner and show your support for my re-election campaign. There will be door prizes and plenty of food for everyone. I look forward to seeing you there. 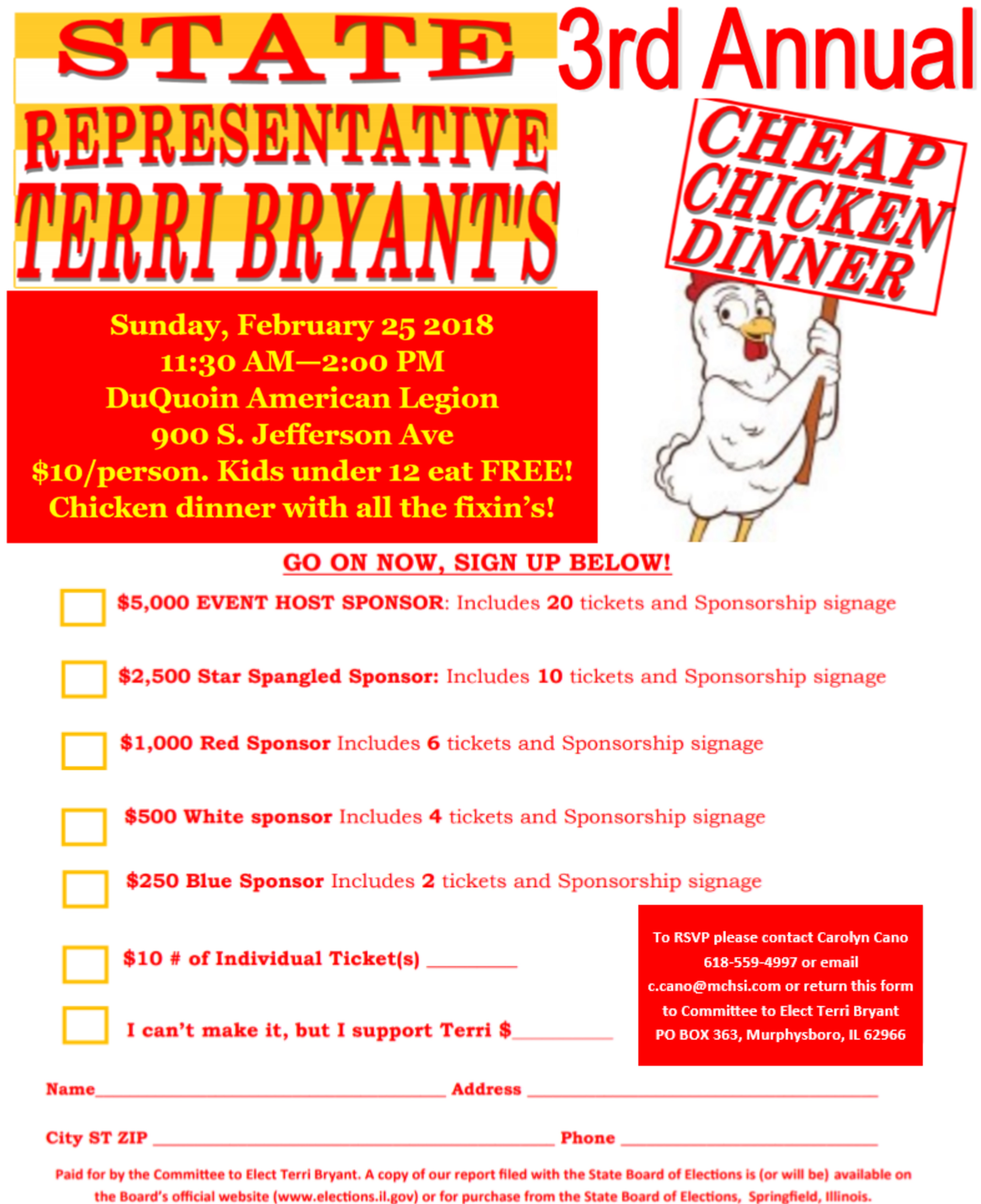 Last night, the Anna-Jonesboro Wildcat Basketball Team won not only the Regional Championship but also broke the school record for wins in a season! Best of luck to the Wildcats as they continue on in tournament play! March Madness has started in February in the 115th district! GOOD LUCK A-J! 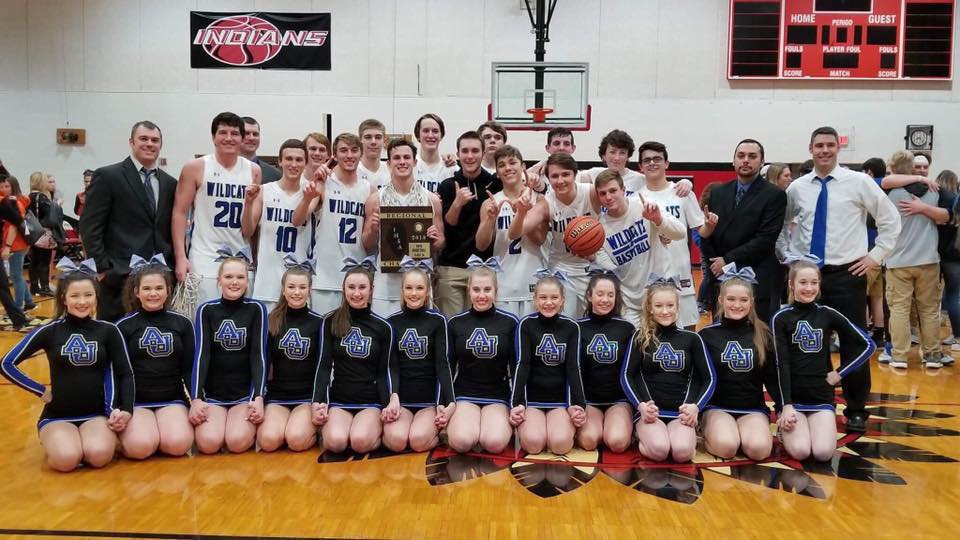 The Story of Marjorie Strong and Her Mother Peggy
Earlier this week, the Chicago Tribune published a story in a continuing series that they call "Suffering in Silence." The articles in the series have detailed the stories of individuals with developmental disabilities that find themselves in the care of the State of Illinois. Often times family members can be unequipped to deal with serious mental and physical developmental disabilities. That is why the State of Illinois runs facilities like the Murray Center in Centralia. I am proud of the close working relationship I have built with the Murray Center Parents Association.

I have toured the facility, met the staff and residents, and have met one on one with parents that rely on the Murray Center to provide top notch care for their loved one in desperate times of need. If you have time, I would encourage you to read the story of Marjorie Strong and her mother Peggy.

The job of State Representative is challenging at times, and you never want to see anyone suffer. You can learn about Marjorie's story and her move from conditions of squalor and almost certain death to the Murray Center, where she is now on her way back to health and safer than she has been in a very long time.

Here is the link with the whole story. Please take the time to read it!