This week in Springfield, the radical liberal Democrat progressive forces from Chicago that control the House of Representatives took direct aim at the 2nd Amendment protections afforded to United States citizens in the Bill of Rights on our Constitution.

It can't be said any other way.

I spent the final two days of February in Springfield, battling Chicago Democrat-led attempts to implement a wide-ranging gun control agenda. Within 48 hours, legislation that creates new restrictions on age, ammunition limits, and new costs and licensing requirements on small business owners that sell firearms passed from committees to the House Floor for debate. I voted NO in  Committee and on the House floor on all the follow gun grabbing measures. 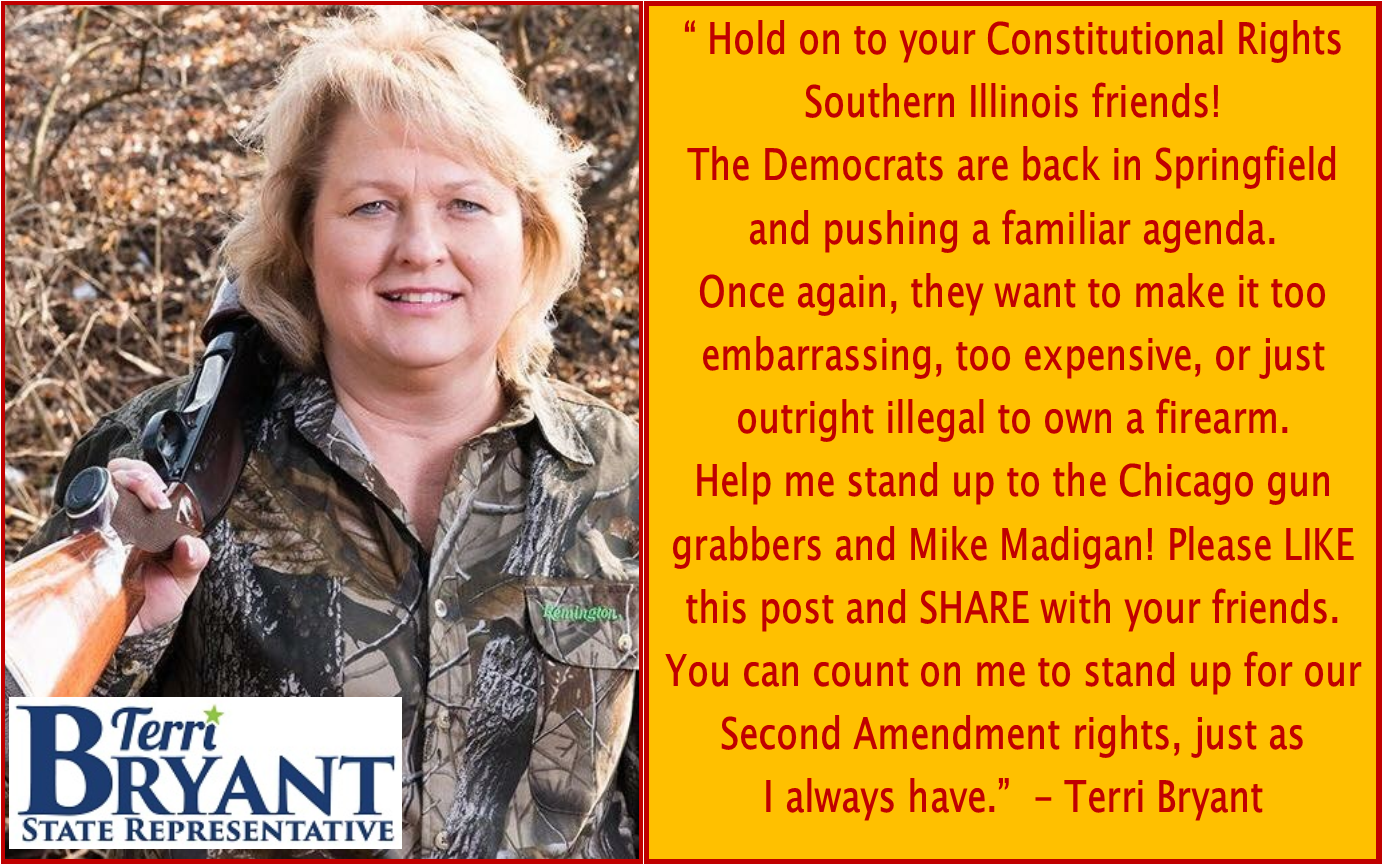 HB 1465 would increase the minimum age to 21 for purchases of semi-automatic firearms or ammunition like the AR-15, .50 caliber shells, high capacity magazines and a host of other munitions. The bill narrowly passed the House 64-51 over my strong objections. In my view, HB 1465 is a punishing overreach. This type of gun grab is what was in mind when the founding fathers of our country made sure Second Amendment protections were included in the Constitution. Forced compliance with surrendering legally owned weapons is the slickest of slippery slopes. The bill makes law-abiding gun owners into criminals overnight. I VOTED NO!

SB 1657 would create new licensing costs and regulations for small, independent gun dealerships. The bill is probably the most notorious piece of legislation among gun owners and Second Amendment supporters in Illinois, drawing more than 14,000 opponents on the record when presented to the House Judiciary Committee. The bill creates a new fee and additional licensing regulations for businesses that do the majority of their business selling guns and ammunition. The bill would require gun dealers to have a state license for the owner, a state license for the dealer, and possibly a local license in addition to the federal license that is already required. The bill also allows for local governments to impose additional requirements on gun dealers.

Once again, Chicago Democrats are leading the charge to run up costs for law-abiding gun dealers. These new regulations will cost small businesses more time and money while at the same time killing jobs. When Democrats say things like ‘common-sense’ gun regulation, law abiding folks should listen closely to what they're trying to really accomplish. People that don’t own guns or know our culture and history in Southern Illinois don’t appreciate the traditions that we share with generations of our families.

We teach our kids how to hunt and how to responsibly own and use firearms. We don’t need the Federal or State government coming into our communities taking guns from law-abiding folks. I’m going to stand up for my district and vote to protect our Second Amendment rights each and every time.

In today's over-hyped, social media crazed world, it can be difficult to tell the real news from the fake. That has become especially true in the 2018 Primary Election for State Representative. Across the State, a Super PAC from Chicago is illegally coordinating with various campaigns and candidates for the Statehouse. Unfortunately, the 115th district is one of the places that this collusion is happening. I've gone into great detail in this space before describing how Paul Jacobs, the Southwest Illinois newspaper (fake news), and Liberty Principles PAC funded by a shady Chicago billionaire and his cronies have colluded to plant fake newspaper stories that later end up in illegally coordinated mail pieces and television commercials.

Well this week, Paul Jacobs' Chicago funded smear campaign was back at it with more fake news. This time, Paul Jacobs and his Chicago Super PAC and fake newspaper are claiming that I am refusing to debate Paul Jacobs.

Here are the facts:

1. Yes. Paul Jacobs did in fact send me a letter via certified mail at the end of February demanding three debates.

2. I in fact DID respond to Paul Jacobs' request. I have provided a copy of the letter for you below. Please note the date. 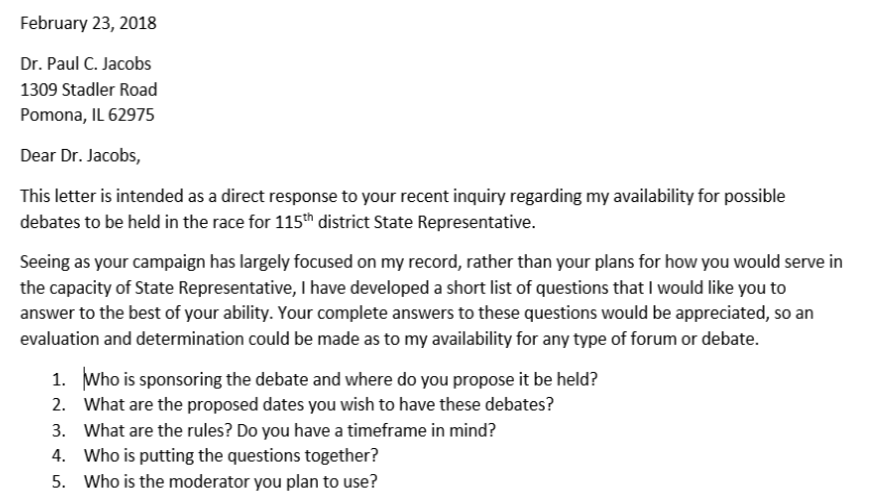 As you can see folks, you gotta watch out for the fake news from Fake Republican Paul Jacobs and his illegally coordinated Chicago Super PAC funded smear campaign.

I also had several questions for the Jacobs campaign in regard to their attacks on me and their positions on the issues. If you have any thoughts on any of these questions, I would love to hear them. See below:

6. In regard to specific issues, if you can not find a suitable date, venue, and moderator to accommodate both of our very busy schedules, I would like you to be specific in answering the following questions:

a. Your criticism of my vote to produce a balanced budget and rescue critical human services, educational facilities, and health care providers has been paramount to your campaign. In the absence of a state budget, it is widely known that a 40% across the board cut would be required to balance revenues with expenditures.

i. IF SIU were to have lost its accreditation, do you believe that would help or hurt our region? If you support 40% across the board cuts, which parts of SIU would you cut? What are your plans to restore funding that has been lost and how would you help stem the tide of declining enrollments at SIU and the overall outmigration of higher education students leaving Illinois?

ii. Do you believe that places like the Carbondale Women’s center should close?

iii. If the State of Illinois did not pass a budget, we would not have been able to consolidate past debts into a lower payment. The budget I voted for gave the Comptroller the authority to save taxpayer dollars on interest payments and allowed health care providers to be paid following a more than 2 year delay in some cases. How would you have addressed the $16 billion bill backlog that we were facing in July of 2017? Which of the state’s bills would you delay paying?

iv. When a Judge ordered the State of Illinois to start making Medicaid payments that we could not afford to make, which of the state’s bills would you have chosen default on in order to make those court ordered payments?

v. When Comptroller Mendoza issued an emergency alert the week prior to the balanced budget passing, she indicated that by mid-August, with no action taken, State employees would begin missing paychecks. As State Representative, in the absence of a budget, would you be OK with State employees not receiving a paycheck?

vi. Your own website indicates that SB 1947 was ‘a good start’, and now you are attacking me using your political PAC backers from Chicago for forcing a ‘Chicago bailout’. How do you explain a recent attack ad that you are running on TV slamming SB 1947 as a Chicago bailout if you also supported the bill? In case you are not sure what I am referring to, I have helpfully included a screenshot of your own website as a reminder of your past support of SB 1947.

vii. You have indicated that you would like to have Illinois’ school district system mirror that of the State of Florida. In order to do that, massive consolidations of schools would have to take place. Which schools, specifically, would you combine together? Are you in favor of one school district per county? One school district per State Representative district? You have repeatedly used this issue as a main tenet of your campaign for State Representative, so I would expect that you would have some detailed plans on which schools you feel should be absorbed into others and which towns you would choose to lose their school district.
viii. Do you support my efforts to re-open the shuttered Murphysboro IYC and do you believe the 100 jobs it will create for our residents is a good thing or a bad thing ?

ix. You are indeed a very busy man. Right now you’re running two optometry offices, a winery, restaurant, and a brewery. With so much going on, how can you reassure the people of the 115th district that you will be a full-time Representative, focused on the needs of the 108,000 residents of the district and their very diverse needs?

Team Bryant will be marching in the 24th Annual DuBois Polish Fest Parade on Sunday at 1:00 PM! This year, the parade is just part of the fun. Check out this year's schedule!

The Antique Tractor show starts at 9:00 AM at the K of C Hall with show cars welcome.

POLKA Mass starts at 10:00 AM at St. Charles Catholic Church

We will have plenty of bright green Team Bryant T shirts for our walkers and great goodies to give away. I hope to see you there. If you have an immediate question, send an email to [email protected] and someone will get back with you right away.